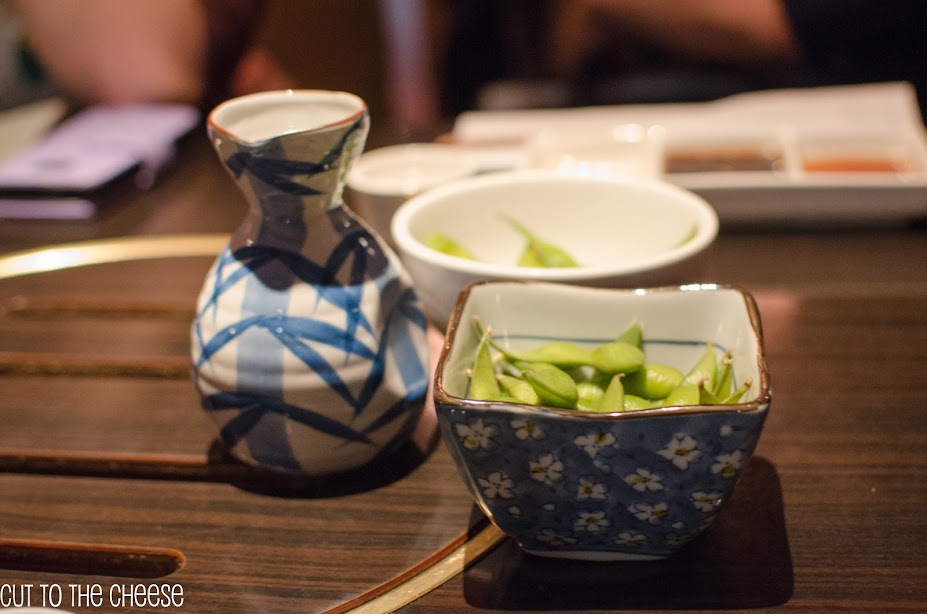 Takumi has to be one of my favourite places for wagyu meat. Supposedly their supplier is the ever-so-famous David Blackmore (more well known for high end restaurants like Rockpool). I was a little skeptical when my friend suggested we get their Groupon deal for a degustation because I doubted that I’d enjoy the cheaper cuts as much as my last experience with the more specialised wagyu ones. Boy was I so wrong. The whole meal was a set menu so we did not choose any of these dishes. 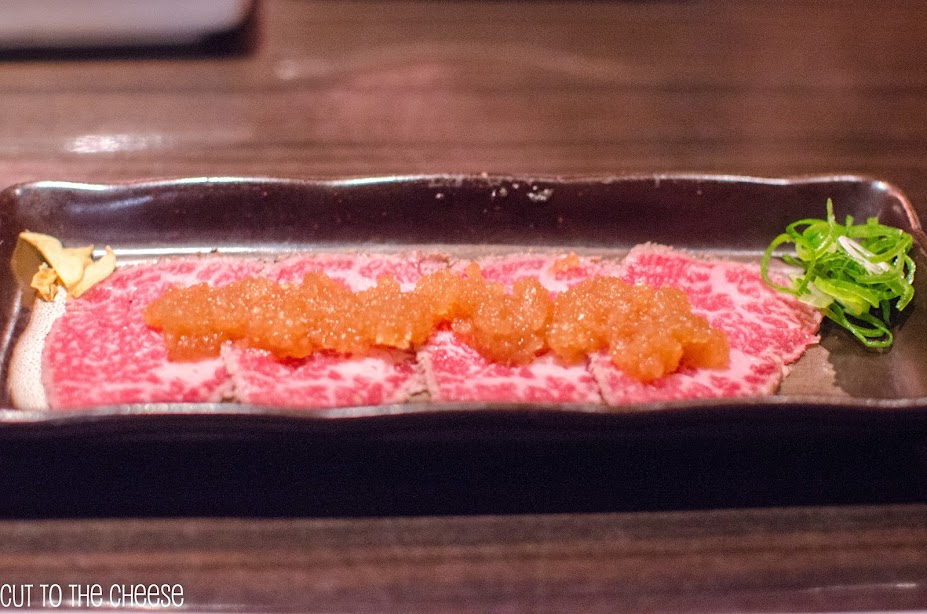 The meal started with some edamame and miso soup for appetisers then the special wagyu beef which was absolutely amazing. The thinly sliced beef seemed to just melt in your mouth. The accompanying onion topping was surprisingly light and tangy, a very refreshing addition to the dish. One of the best tataki style dishes that I have had. 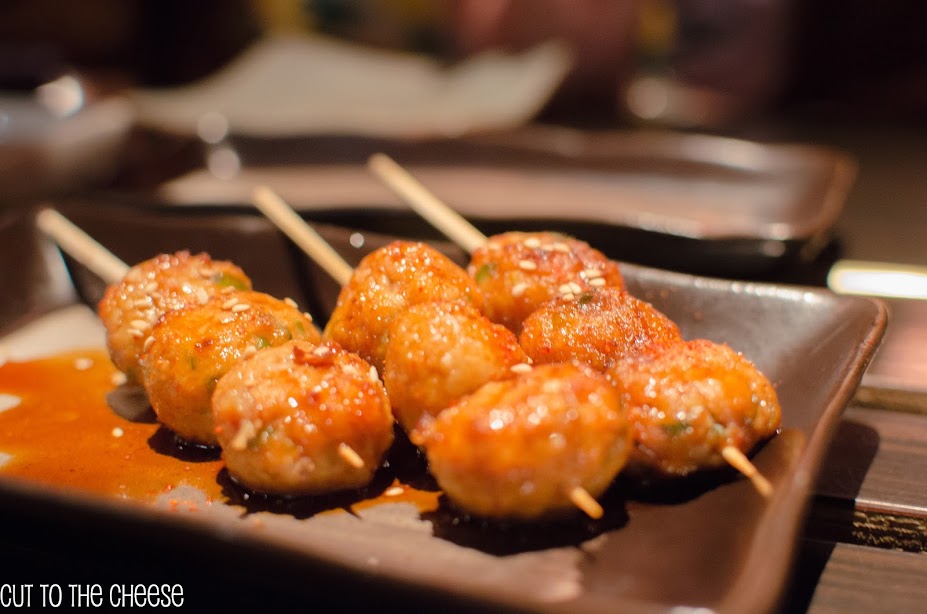 After such an amazing dish, I was not very interested in the chicken skewers when they came out but I was mistaken. The mince was juicy and grilled just right. Not as sweet as I thought it would be but yummy nevertheless. 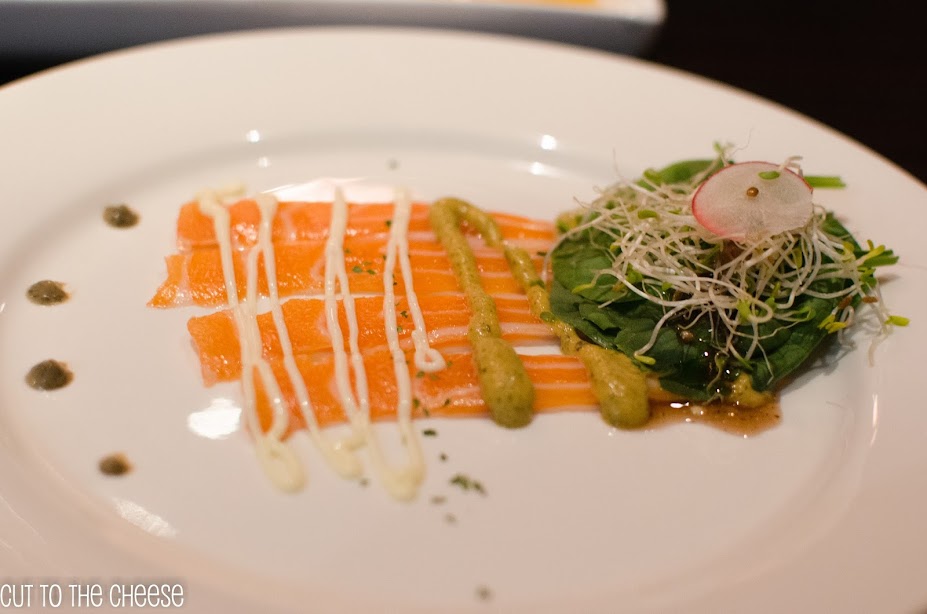 Once again I was less than impressed when I saw “just a few small slices” of raw salmon come out. Then again I’ve been absolutely wrong so far. Turns out the salmon was not only very fresh but the seasonings made the usual raw fish into a melting heaven in your mouth. 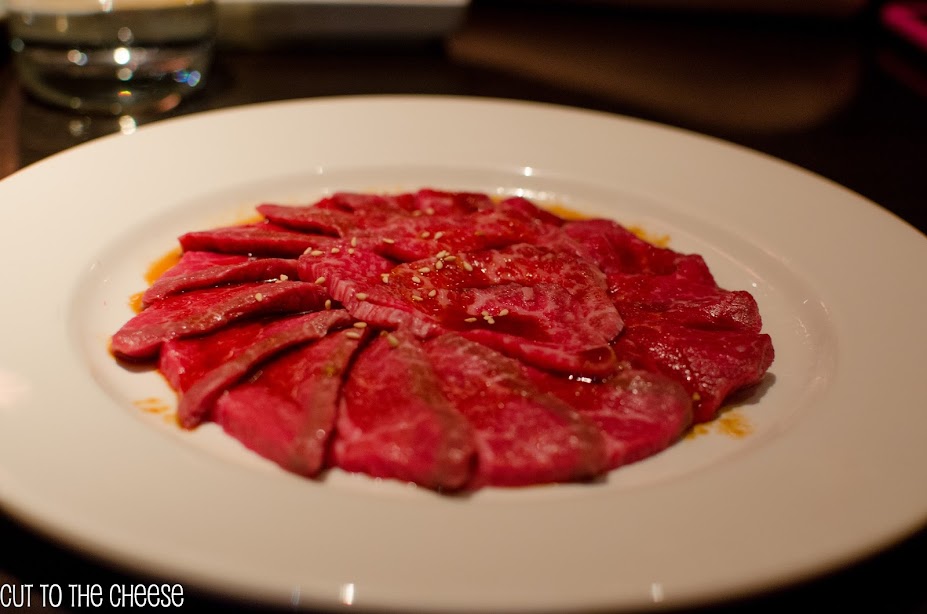 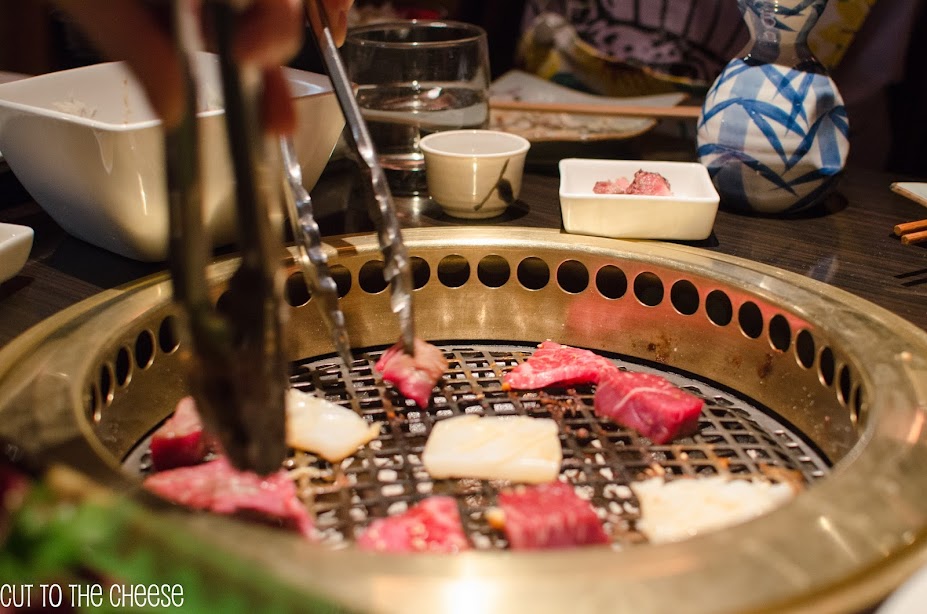 Then it was grilling time. We each were given a whole plate of the wagyu beef blade to cook. Which seemed like great value already. Then it turns out the meat tasted amazing. This was yet another surprise of the night. I was worried that such a cheap meal meant we were going to be given cheap/average meat. Alas I was (fortunately) wrong. Just look at the marbling on that meat, plus by barely cooking it I was filled with a soft bouncy beefy wonder.

You may also notice the holes on on the side of the grill. Takumi specialises in a “smokeless” grill meaning all the air is sucked out before the scents can get stuck onto your clothes. It does provide a much more enjoyable dining experience because there aren’t any clunky overhead vents (which many Korean bbq places have) but you really can’t avoid smelling a little like the grill once you leave. 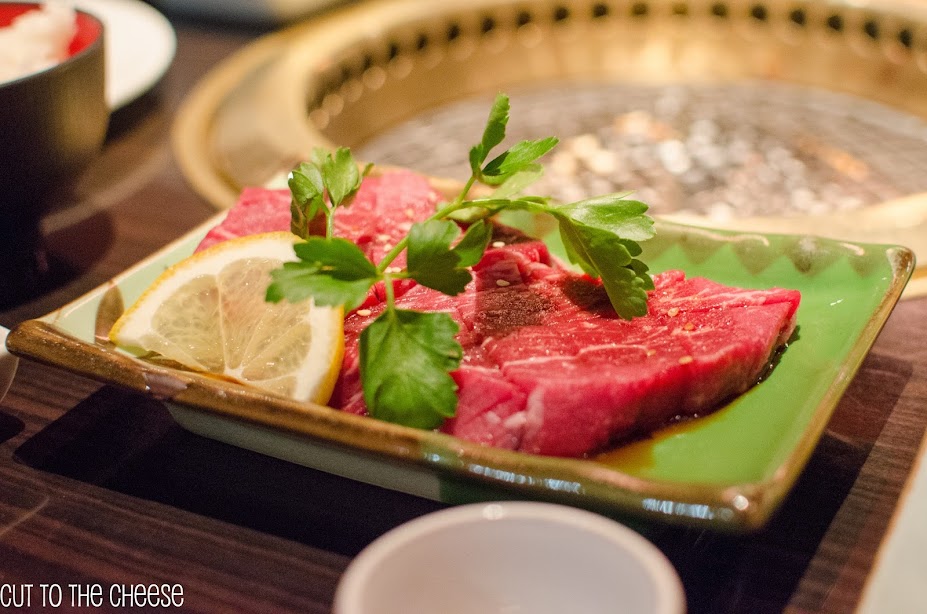 The other wagyu included was the much more expensive jo-hire, which was shared between the four of us. We could definitely tell this was a higher quality cut of meat but that did not necessarily mean we enjoyed it any more than the karubi. The chunks were cut thicker but once you consumed it, it seemed as though no chewing was necessary due to the ridiculous softness of the meat. It seem to just disintegrate so easily. Honestly I preferred the karubi because it wasn’t so…rich? If meat could be such a thing, this was it. 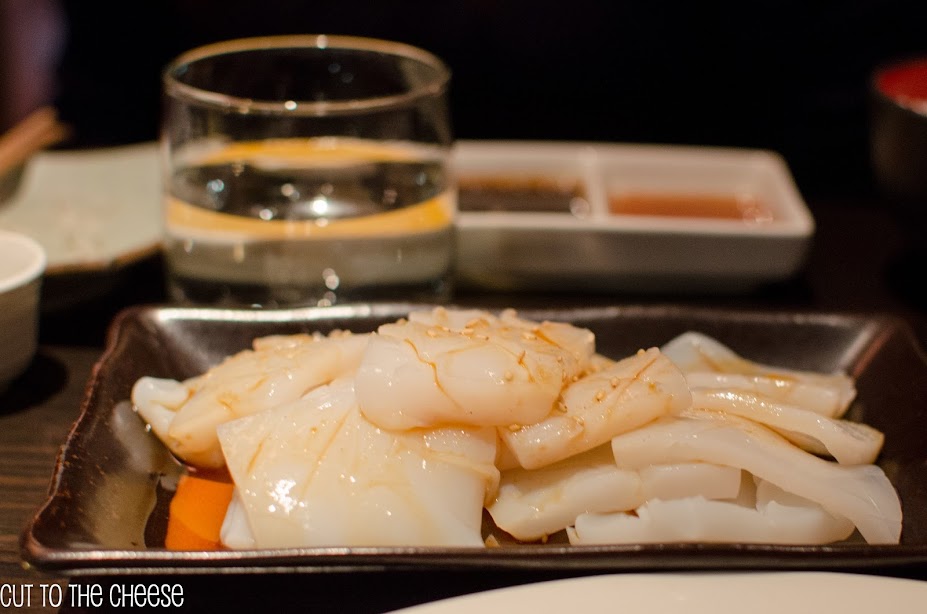 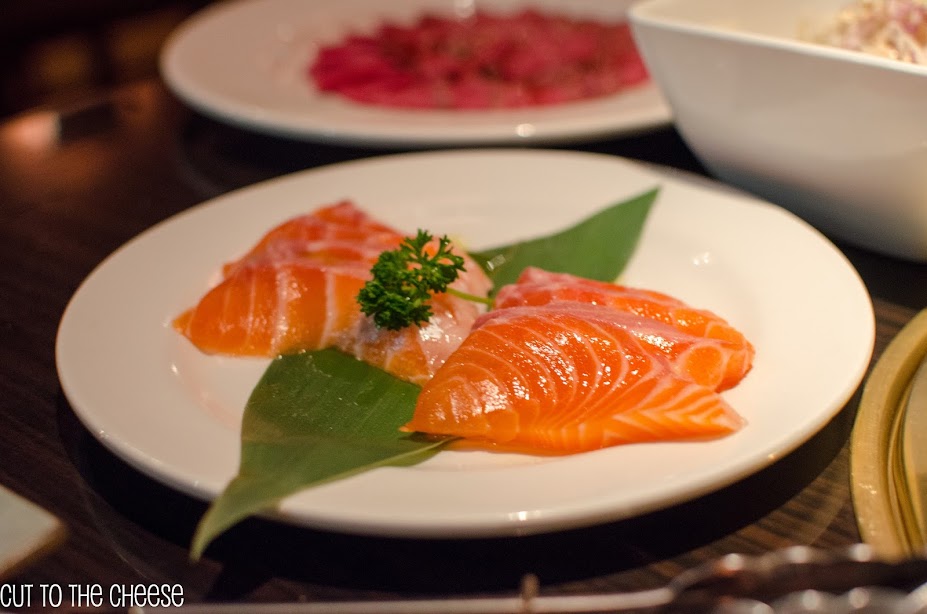 I was a little worried cooking my own seafood because I usually don’t cook anything. So it was a balance between trying to not make myself sick from undercooking the salmon and squid combined with not drying it out by overcooking it. But it turned out great, because the produce was so fresh. I ended up just searing my salmon before eating it because I prefer raw fish anyway. One of my friends ate his raw (despite this technically not being salmon sashimi) because he said it was good salmon afterall.

Dessert was red bean and black sesame ice cream which were yummy. Very hard to go wrong with these. My favourite would be the azuki which surprised me because I usually don’t like red bean. But this one was creamy sweet. These were not a soft or rich texture but more on the icy side.

As I told you at the beginning, this whole meal was a huge surprise but really I should have faith that my favourite Japanese restaurant would pull through and provide both good service and an even more delectable meal. The only downside is that you do have to cook most of your own food yourself which may mean that because most of us aren’t train chefs, we are not fully utilising the food’s full potential. But because of this, I feel that the meat we get is a much higher quality so you barely have to cook it anyway.

Oh and one last thing to let you know before you decide to go. Much to many of my first-timer friends amazement, Takumi coats their grill plates in an interesting way. Instead of oil/butter/nothing you are given a blob of lard/fat. It’s not the most appealing looking thing but it makes your food so delicious. You have been warned.

30 Dec This entry was published on December 30, 2013 at 9:25 am. It’s filed under Outings and tagged Japanese, Melbourne CBD. Bookmark the permalink. Follow any comments here with the RSS feed for this post.